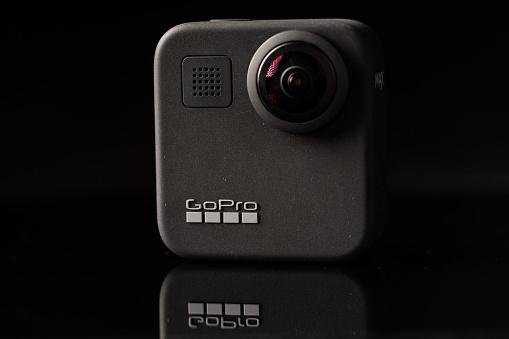 Cameras and action cameras have been very popular in the last decade or so. We are constantly pushing the boundaries of what these cameras can do. Well, GoPro is leading the way and in this article, we will be talking about if the GoPro MAX is worth it. Here is everything you need to know if you are interested in purchasing the GoPro Max.

What is The GoPro MAX

The GoPro MAX comes with 3 cameras to be able to record a full 360°. You can also shoot traditional HERO-style videos and photos. It allows you to vlog to the max with shotgun mic performance and a front-facing touch screen.

The GoPro MAX gives you unbreakable stabilization by using 180° capture as the ultimate buffer. The video quality is very smooth. And with a touch screen, it’s easy to control your camera without any buttons. Or frame up your shot, playback footage, and snap a selfie in HERO mode.

You can shoot in HERO mode and share while you’re there by live-streaming it to any platform or just your friends. You can get Max Hyper Smooth stabilization as you broadcast via the GoPro app and save footage to your SD card to check out later.

It is also compatible with GoPro Mounts + Accessories. You can wear it or mount it. There are over 35 compatible mounts and accessories that can help you capture your adventures.

GoPro wanted to make a 360-degree camera that people might want, and in that regard, it’s succeeded. GoPro has lowered the price, made the camera easier to shoot with, and, frankly, far more useful. When you don’t need to shoot 360-degree footage, the Max works like a Hero 8 Black. Familiar action camera fields of view are at your fingertips.

The GoPro Max doesn’t display nearly the same image quality as the Hero 8 Black. However, stabilization is superb and GoPro has managed to turn its 360-degree camera from a geeky curiosity into the most fun camera in its range.

Handling the Max does feel different from a standard GoPro, though. The convex lenses on each side are vulnerable and perhaps more likely to become damaged at home, or on the way to a shooting location than they are during capture.

See also  Is FitXR Worth It? - Everything You Need To Know

You can largely just throw a normal GoPro in a rucksack; I wouldn’t recommend doing so with a Max. GoPro does include a couple of lens caps in the box – but they’re easier to lose than a TV remote control. Nevertheless, they’re essential to keeping the optics scratch-free. These lenses are non-replaceable, so you’ll have to take care.

Actually using the Max is headache-free. It has built-in mounting fingers, so a separate mounting case isn’t required; just some form of mount or stick. It’s water-resistant, too, if not quite to the same level as the Hero 8 Black.

The GoPro Max is certified to a 5m depth; the Hero 8 Black to 10m. But it’s important to understand what this means in real terms. Water-resistance refers to the pressure of water a device can handle, so while the Max may be okay at a depth of 5m, it won’t (according to the stats) hold up at 5m depth with motion.

The Max can handle surface-level swimming and snorkeling, but shouldn’t be used for high-speed water sports. This model isn’t much used for underwater shooting anyway, thanks to visual aberrations resulting from the way the lens reacts to the refraction of light through water.

All the other basics of the Max are on point. You can move and replace the battery without having to unmount the camera, thanks to a side-loaded battery compartment. Plus, it uses a USB-C cable to charge — most likely the same as your phone if you own a recent Android.

This is a 2in touchscreen. Much like the GoPro Hero 8 Black, the chunky borders give you the sense that it could be significantly larger in the same case. However, it’s easily big enough with which to confidently compose, and the LCD panel goes bright enough to stand out on brighter days.

Nearly two years after the first GoPro 360 camera, the Fusion comes its second attempt. The GoPro Max is the next-generation 360 camera featuring hyper smooth 2.0, 5.6K video resolution, Hero Mode, and a revamped app designed to make using your 360 camera as easy as possible. That last point is an important one because the Fusion was criticized for being too difficult to use for the average person. I’ve been using the GoPro Max for around a month now so I have a pretty good idea of the cameras pro’s and weaknesses. Has GoPro managed to create the best 360 camera ever or are 360 cameras still too complicated to use? In this review of the GoPro Max, I’ll tell you everything you need to know about this latest VR camera.

Is The GoPro Max Worth it?